1968 was the third year of South Africa’s operation “Regruk” to restore Springbok rugby to its former glory. This year the British Lions were convincingly beaten and the previous year the series against the French was also won. But at the end of 1968 there was a short tour to France with two test matches.  Not all of South Africa’s rugby bosses agreed with this tour; many, including coach Johan Claassen, viewed it as unnecessary. But Dr. Craven was adamant that France had to be compensated for touring South Africa the year before when the New Zealand tour was cancelled for political reasons. There was no better way to thank them than to undertake this tour. 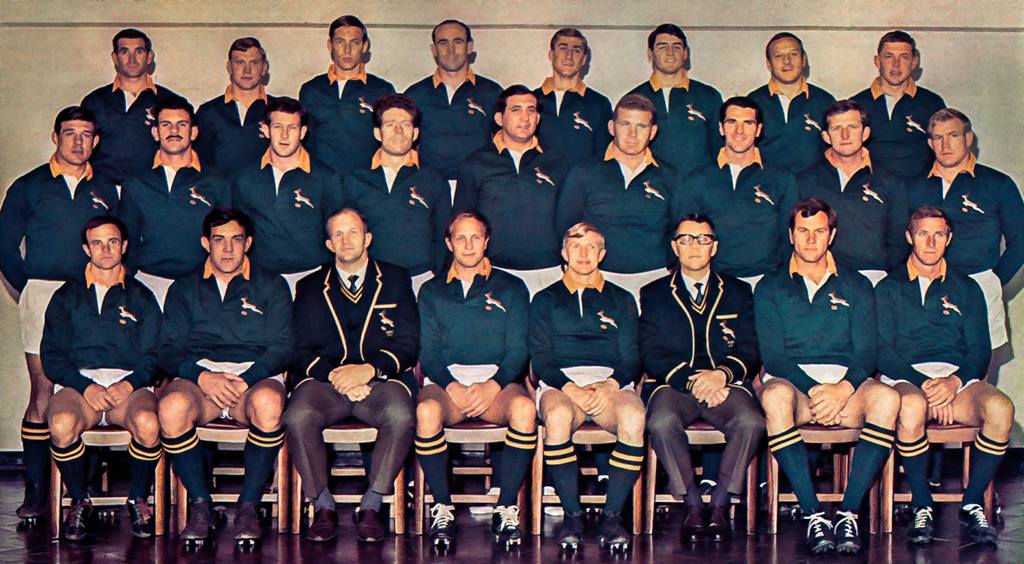 The first test in Bordeaux was a difficult one for the ‘Boks. They held out for 70 minutes, but then the French got in top gear with some brilliant running rugby and scored two tries in the last 10 minutes. The Springboks won the game unconvincingly by 12 points (four penalties by Piet Visagie) to 9 (three tries). This was a moral victory for France. In the midweek game a few days later, the ‘Boks were also beaten by Southwest France. French optimism for the second test was sky high. 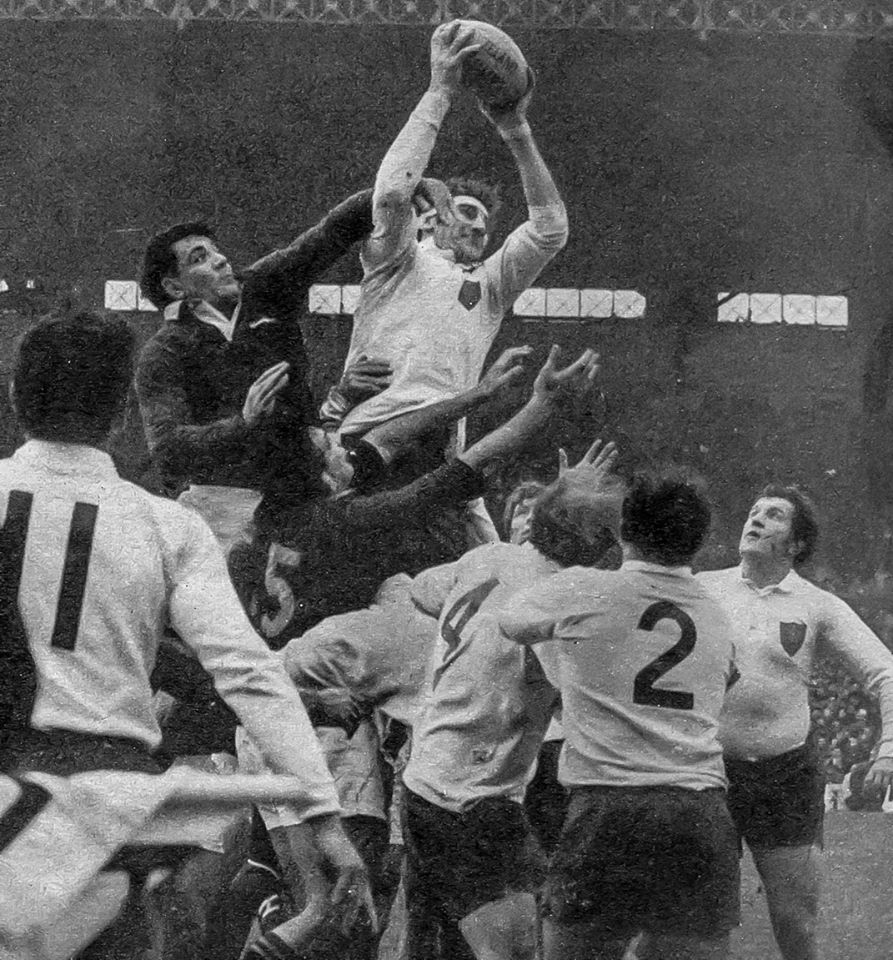 There was no rain in the week prior to the test match and the pitch was ideal for running rugby, although it was bitterly cold on the day of the match. Dawie de Villiers won the toss and decided to play against the wind in the first half.

In the first quarter of the game the French forwards, particularly Benoit Dauga, Elie Cester, Walter Spanghero and Bernard Dutin, took such a hold on the game that ‘Boks could not get out of their own half. But then the Springboks slowly got back into the game although the French were the first to score with two drop goals – first by Puget and then by Paries. Late in the first half Claude Dourthe went offside and Piet Visagie kicked the penalty against the wind to make the score 3 – 6. Jan Ellis then stepped on the touchline before diving over. Shortly afterwards Syd Nomis scored what looked like a certain try, but it was not awarded. At halftime it was still 3 – 6. 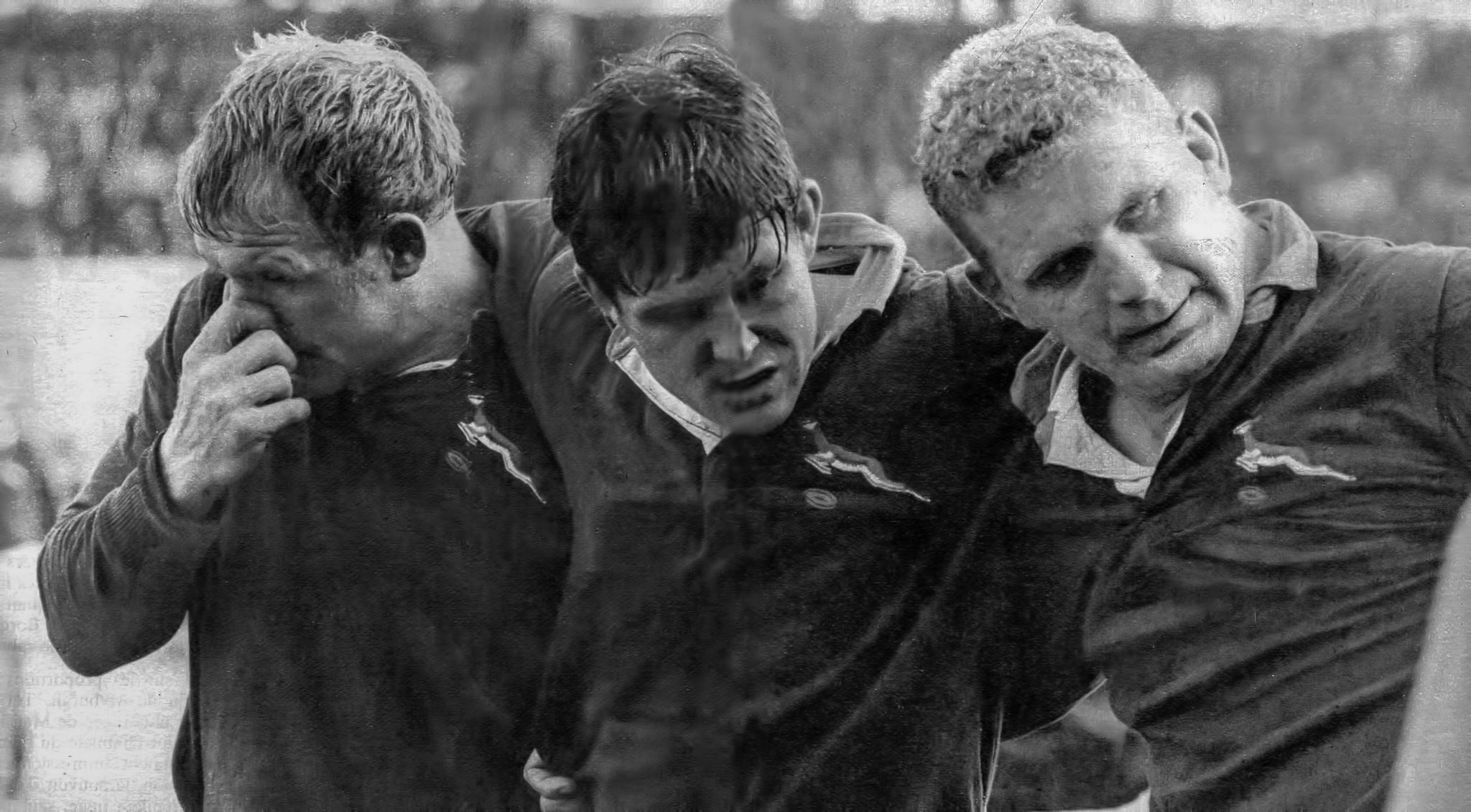 The second half saw the Springboks playing some of the best rugby ever seen in their history. It reminded one of the first test of 1960 against the All Blacks. No wonder Dr Danie Craven afterwards said that this was perhaps the best test match he had ever seen.

The energy of the French forwards were sapped in the first half and now the Springbok forwards and backs combined in a dazzling display of “total running rugby”. After repeated assaults on the French line Jannie Engelbrecht, Dawie de Villiers and Syd Nomis scored three unforgettable tries and Piet Visagie added seven more points with the boot. 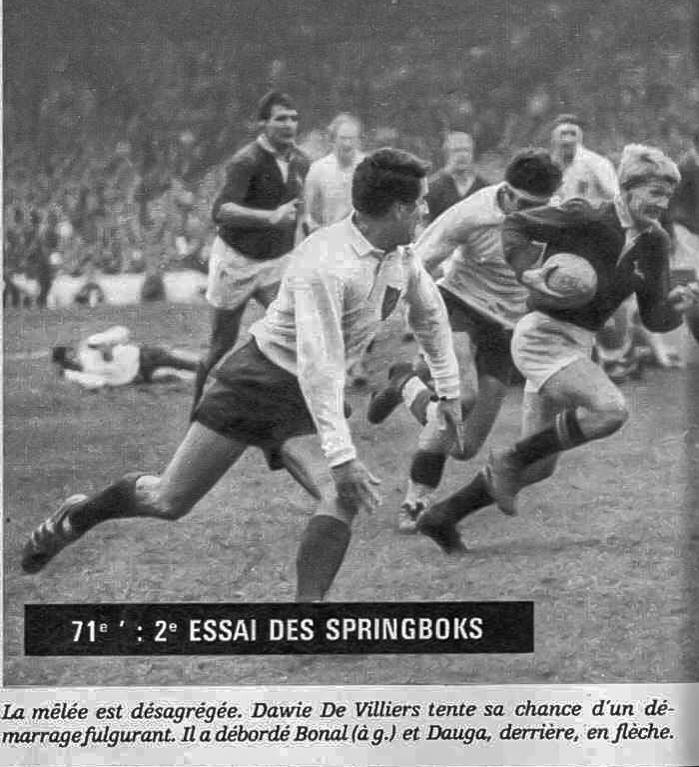 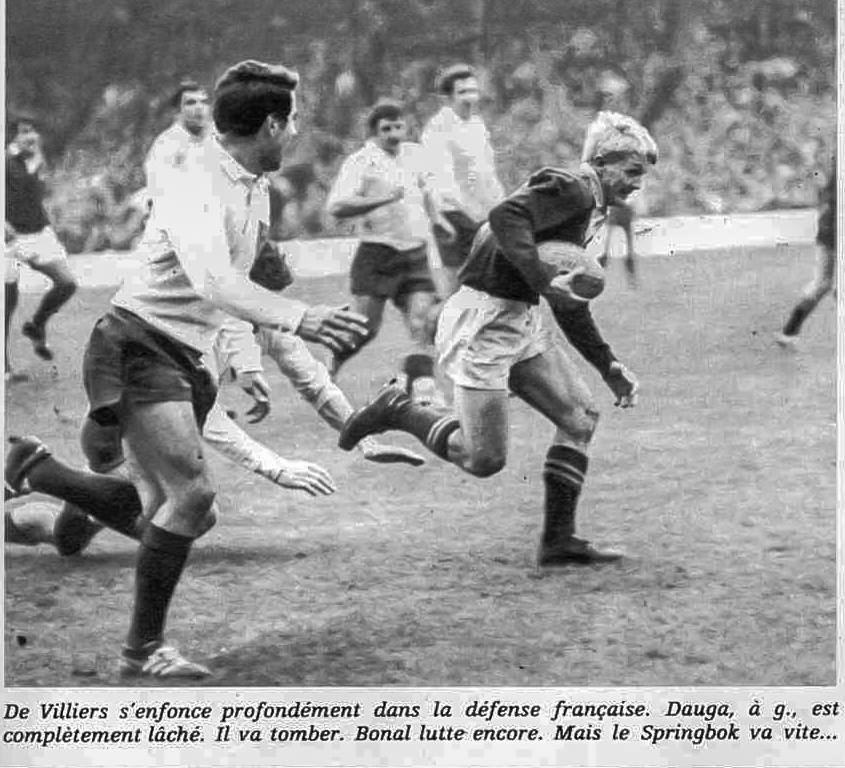 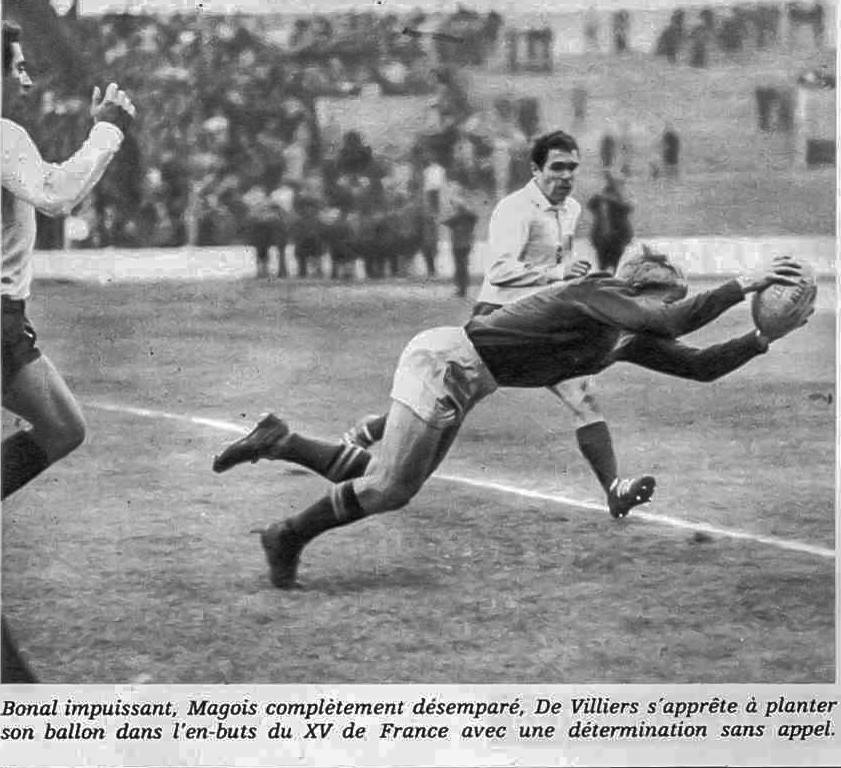 The first try came 20 minutes into the second half when Mannetjies Roux scooped up a loose ball after a movement by Syd Nomis and Eben Olivier. Frik du Preez passed to Engelbrecht who had a bit of space. He swerved out and then jinked to the inside for one of his best tries in test rugby. Not long afterwards Dawie de Villiers broke cleanly from the base of a scrum and ran right through without a hand being laid on him. Visagie converted. A little later Eben Olivier tackled Claude Dourthe near the French line and Nomis dribbled the ball over the line for what should have been an easy try. Instead Nomis stumbled …. fell …got up again…and fell again as a cramp in the leg all but paralysed him. The defence was rushing up as Nomis continued his desperate slow-motion crawl towards the ball. He fell on the ball just in time for a remarkable try. Visagie converted again. 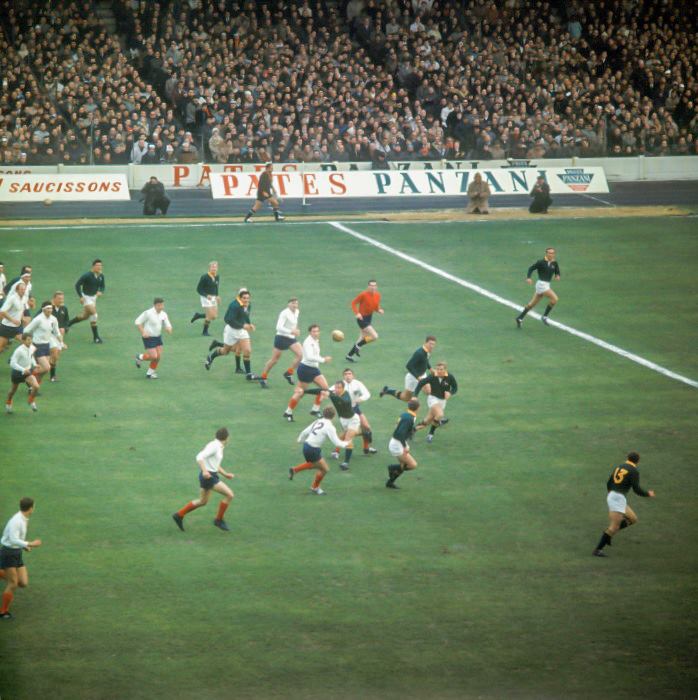 The French then staged a magnificent come-back which was rounded off with a great try by Eli Cester next to the Springbok posts. The final whistle went with the score 16 – 11 to the ‘Boks.

This was the first time that the Springboks had to play under the new “no-direct-kick-out” rule and they adjusted brilliantly. Albert Ferasse, the chairman of the French Rugby Federation, regarded the game as of exceptional quality ………”perfect rugby” as he referred to it. What made this a great game was that it was a clash of two very good teams, both willing to play open rugby.

It is worth mentioning the Springbok backline for this game. Dawie de Villiers and Piet Visagie at half-back, the centres were Eben Olivier and Mannetjies Roux, and on the wing were Syd Nomis and Jannie Engelbrecht with H O de Villiers at fullback. What a backline ! The pack was equally impressive. Mof Myburgh, Gys Pitzer and Hannes Marain the the front row; Frik du Preez and Gawie Carelse at lock; and the loose forwards were Jan Ellis, Piet Greyling and Tommy Bedford.