The Great Fight Back in Christchurch 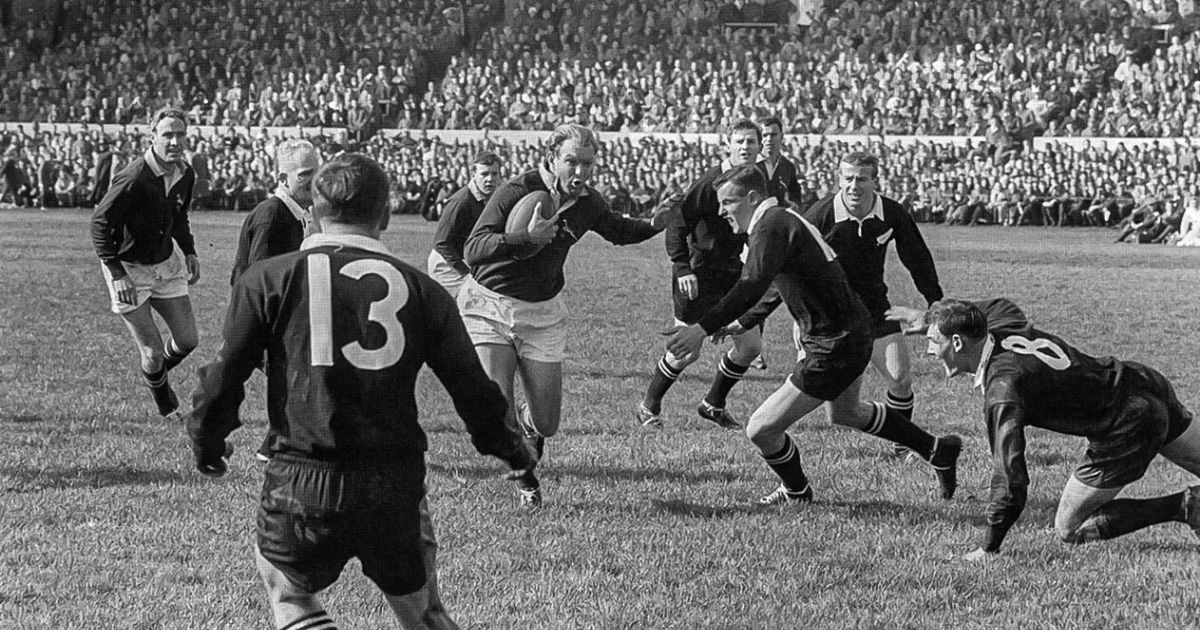 The 1965 tour to Australasia turned out to be the darkest year for the Springboks so far in the twentieth century. The trouble started in 1964 when they went down to France 6 – 8 in a one-off test at Springs. The next year they went on a short tour to Scotland and Ireland under the captaincy of Avril Malan and lost both internationals. This caused Malan to retire from the game.

Then followed the tour to Australia and New Zealand under the captaincy of Dawie de Villiers. The Boks lost both internationals against the Wallabies (although largely as a result of some very poor refereeing by the Australian referees). They were a bit unlucky to go down 3 – 6 to the All Blacks in the first test and might just as well have won or drawn the match. In the second test the were convincingly beaten 0 – 13. So, by the time of the third test at Lancaster Park, Christchurch, they had lost seven internationals on the trot and they were up against a very, very good All Black side (the All Blacks had lost only one game since 1960).

Five changes were made to team from the second test. Dawie de Villiers (back from injury) and Jannie Barnard replaced Oxlee and Nelie Smith at half-back to add more of an attacking flavour to the backline. Don Walton came in as hooker for Abe Malan, Tiny Naude at lock for Piet Goosen, Lofty Nel moved to flank in place of Haas Schoeman and Doug Hopwood was at number eight.

Dawie de Villiers won the toss and opted to play against a stiff wind on a waterlogged surface.  Willement’s kick-in bounded off an upright and Mannetjies Roux had to find a hurried touch still in the Springbok 25. From the line-out a ruck formed which the All Blacks won. Mannetjies Roux went for an intercept and left a gaping hole in the midfield. Colin Meads passed to Kel Tremain who ran through the middle of the field like a centre to score an easy try which Willement could not convert. The ease with which the All Blacks scored this try only in the second minute of the game seemed to bode ill for the Springboks.

However, three minutes later the Springboks took a 5 – 3 lead. De Villiers kicked high for his forwards and a five yard scrum followed. The Bok forwards pushed the All Black pack back yards for Barnard to feed Gainsford. He checked and spotting a gap went through it to score. Tiny Naude converted. 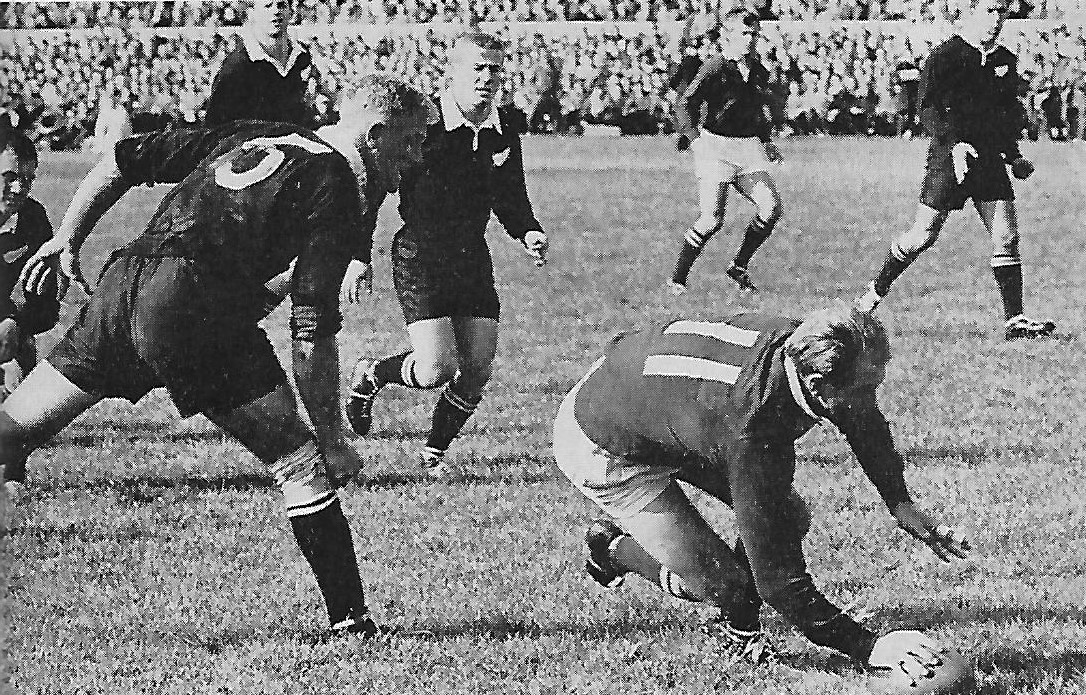 Except for a bullocking blindside run by Colin Meads , the Boks held the initiative for the next 15 minutes, the forwards playing with fire and purpose. Frik du Preez was winning a fair amount of clean line-out ball and Mannetjies Roux was especially alert and elusive in the back-line. He almost scored when Jannie Barnard punted to the left and Roux footed on; Laidlaw saving just in time. Roux then snapped up a loose ball and dodged several opponents before he brought down. Barnard then missed with a poor attempt to drop. Mannetjies Roux then cut through the All Black back-line and Engelbrecht and Lofty Nel were checked close to the All Black try-line.

Then, against the trend of play, New Zealand took the lead again when Lionel Wilson made an uncharacteristic  bad error. Moreton launched a speculative high punt which Wilson had enough time to deal with. He hesitated fatally and the ball skidded away from him for Ron Rangi to touch down first. Willement converted to make it 8 – 5 to the All Blacks. In the process of Rangi’s try, the referee pulled a hamstring and had to be replaced.

Now followed a period of pronounced All Black superiority. Willement succeeded with a penalty and it was 11 – 5. The Springboks were under severe pressure. McLeod won two successive tight head heels in the Springbok 25 and from the second Murdoch almost scored under the posts. The All Black forwards were driving with ominous power, and instead of taking the ball with both hands Du Preez and Naude were tapping back rashly and inaccurately from the line-outs, De Villiers having to take the full brunt as the All Black forwards came through on to him.

In the 33 rd minute NZ stretched its lead to 16 -5 when another tapped lineout ball “sold” De Villiers and a loose scrum followed inside the Springbok 25. The ball came back to Laidlaw and Murdoch ran just far enough on the blindside to give Moreton the gap which allowed him to score in the corner. Willement converted.

Then the Springbok fight-back started. Jannie Engelbrecht coming round from the blindside wing to pick up a ball that had shot out of a scrum near the touchline, dodged several defenders and passed outside to Naude who crashed over only for it to be ruled a forward pass. Just before half-time Naude missed with an easy penalty.

The Springboks were definitely not eleven points inferior to the All Blacks as the half-time score suggested. But they had made costly mistakes in defence and did not take their chances. Dawie de Villiers gave an inspiring team talk. He refused to accept defeat and persuaded his team that could still do it with wind behind them.

Immediately on resumption Naude missed another kickable penalty when Colin Meads went offside. In the fourth minute there was a set scrum just outside the All Black 25. Hopwood peeled away to the blindside as a decoy, and De Villiers made a little ground to the open side before passing to Barnard and ina full line movement Gainsford slipped between Moreton and Rangi before giving to Roux who drew Birtwhistle to give Brynard the overlap for a try in the left-hand corner. 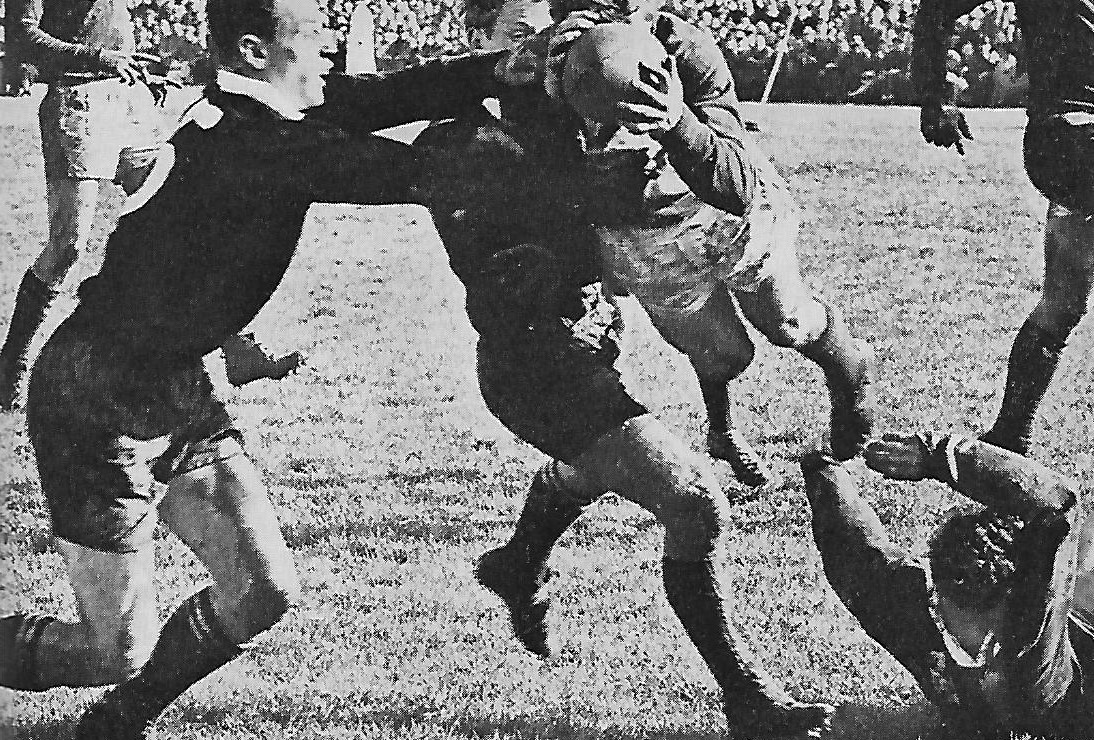 This was copybook stuff and from that point the Springbok halves clicked with a wet, greasy ball and on a slippery surface. They did everything right. Jannie Barnard later recalled that he made the only handling mistake in forty fantastic minutes which saw the Springboks ran up 14 points without reply to snatch victory in a match that seemed to be irretrievably lost. Gainsford and Roux who had seldom combined well, this time combined perfectly.

NZ came back briefly. Willement was short with a penalty against the wind and Moreton hit the upright with a drop.

The crowd was wonderfully sporting. A two-handed pick-up by Mannetjies Roux, at full speed, of a muddy ball off the ground was cheered to the echo and from the centre’s run Engelbrecht almost got over in the corner. The Springbok forwards then drove over the line and Jan Ellis was really unlucky not to be awarded a try.

However, the Boks soon struck again with a remarkable try by Brynard. De Villiers moved to the blinside, saw Tremain and Malcolm Dick waiting for him, and then ran to the open side. The All Black inside backs were not coming up evenly on defence and Jannie Barnard knifed through a gap. His pass to Gertjie Brynard was not good and the winger had to stoop to get hold of it. Brynard cut infield and dived spectacularly over the line amidst three defenders. Tiny Naude converted again.

Six minutes later Naude hit the left upright with a penalty. No matter, the Springboks had territorial advantage and De Villiers was an inspiration – running when he could, passing at the right time and kicking for position when necessary. The equalising try came in the 23 rd minute. Willement dropped out into touch on the full. From the centre-field scrum on the New Zealand 25 linethe Springbok backs moved right and Mannetjies Roux, who had an excellent game, timed his pass perfectly to put Gainsford clear. The burly centre looked unstoppable as he tore for the line 25 yards away, running at a slight angle towards the right-hand corner. He ran straight at Willement, causing the full-back to stop dead, and went outside him for his second try a few yards from the corner. Naude missed the penalty. 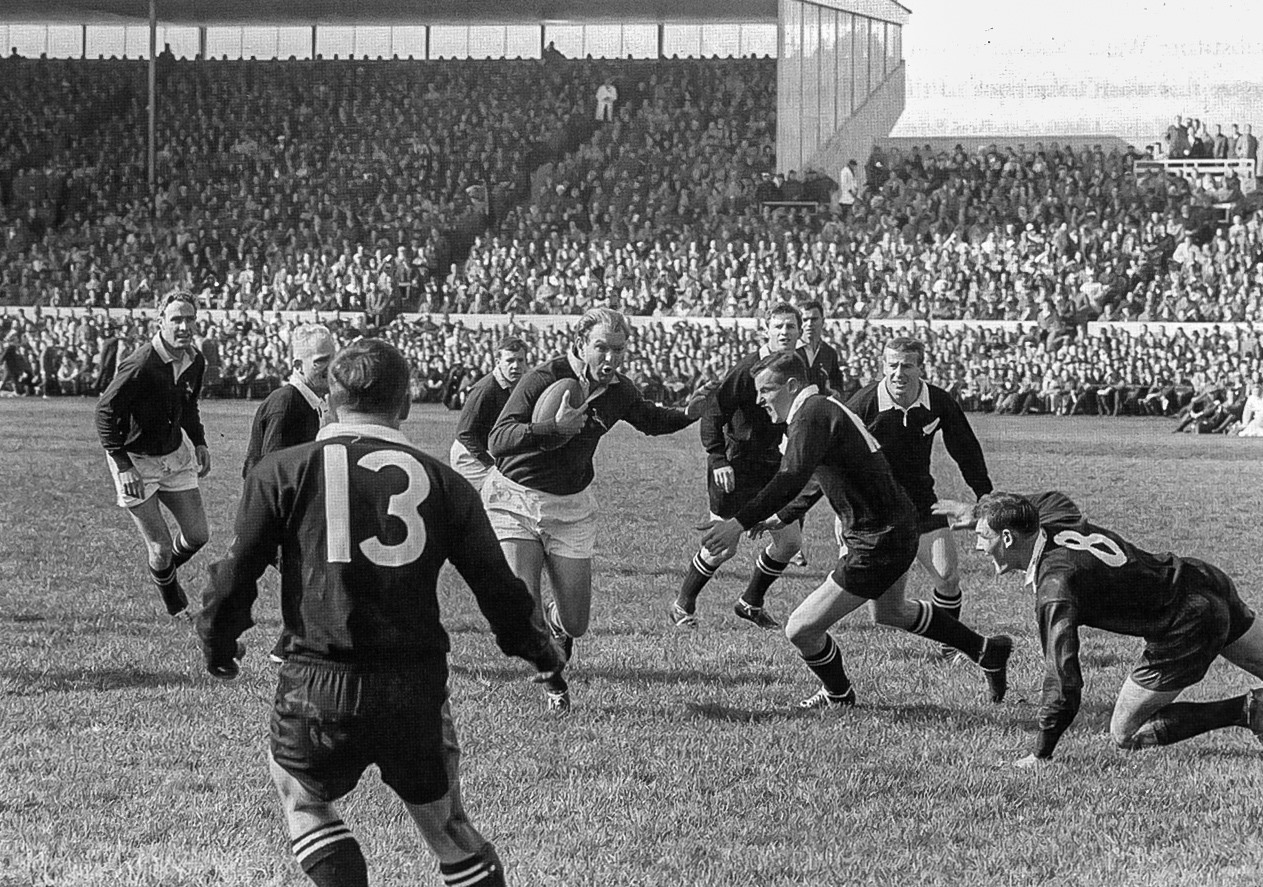 The All Black forwards tried to come back in the game but the Springboks had the ascendancy and were magnificent. Hopwood curbed the activity of Tremain and Conway round the scrum by ordering the ball to be held when Don Walton won the strike; he tidied up by ‘killing” the loose ballwhen the All Black forwards tried to drive and had the better of Conway at the back of the line-out. Ellis was magnificent in the tight; Andy Macdonald superb in the mauls; Lofty Nel and often Tiny Naude were quick to the breakdown points and Naude and Du Preez was doing a fine job in the lineouts. The Springbok forwards simply could not be subdued.

With three minutes to go, Laidlaw’s clearing kick fails to find touch. Lionel Wilson is in position to take the ball but is tackled by an All Black in an offside position. The referee ask De Villiers whether he will take a kick or a scrum. A kick it is – on the 25 and five metres in from touch. Tiny Naude’s kick flew low but dead centre and the flags of the touch-judges went up as the Springboks flung their arms up in joy and Lofty Nel ran up to embrace Naude. SA 19 – NZ 16.

A minute from full-time, the Springboks hold the ball in a scrum to trap the All Black flankers offside. It is sixty yards out but Hopwood and De Villiers decide that Naude should kick for the posts in order to consume valuable time. The kick is well short and Whineray catches the ball fifteen yards from his line and starts a passing movement which ended up in a ruck. The All Blacks win the ball, but there is a breakdown and Jannie Barnard ends proceedings by kicking the ball into touch. It was an unforgettable match of immense drama and a great Springbok fight-back.