This was probably the greatest and most intense test match that I have ever seen, including the 1995 World Cup final. The All Blacks were unbeaten for five years ; the last test they have lost being the third test against the 1965 Springboks. They comfortably also won all ten their provincial games leading up to the first test, scoring 56 tries against only six. General consensus was that this was the best All Black team yet to visit South Africa and they were on a mission to become the first NZ team to win a series in South Africa. These All Blacks were giants, men who had forgotten what defeat taste like and who had the rugby world at their feet with the phenomenal rugby that they played. 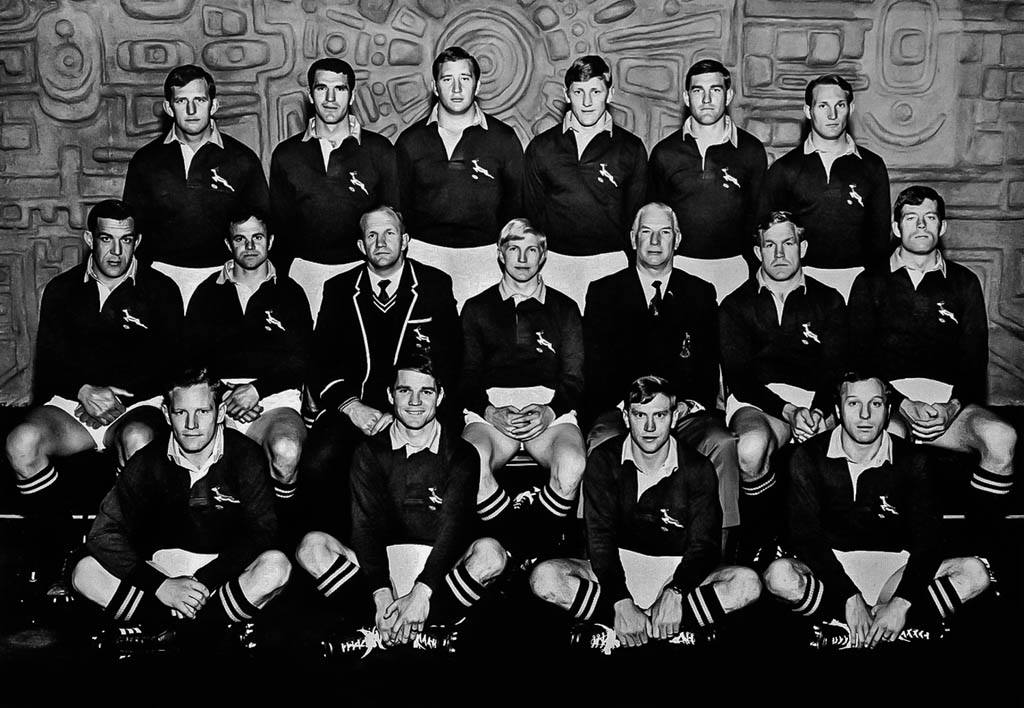 Immediately after the 1965 tour SA Rugby embarked on a five year plan to rebuild SA rugby with the objective to dethrone the All Blacks in 1970 as the world rugby champions. The rebuilding phase went reasonably well, but then the Springboks went on the disastrous 1969/70 demonstration ridden tour to the UK where they lost two tests and drew the other two. When the All Blacks arrived in South Africa they were the favourites to win the series and to avenge the losing series of 1949 and 1960. On the eve of the first test nothing had changed: the Springboks were not given much of a chance. The resolve and commitment in the Springbok camp was however something to behold.

The Springbok team that took the field had some question marks over it. H O de Villiers and Gys Pitzer were injured and the rugby public questioned the inclusion of Tiny Neethling over Mof Myburgh (who was not yet fit though), Albie Bates over Tommy Bedford, Johan Spies over Gawie Carelse or Western Transvaal’s Daan Ackermann, the by then relatively unknown Joggie Jansen at inside centre and newcomer Ian McCullum at full-back. The general view was that this was a team that could not beat the invincible All Blacks. By the end of the series, the public would sing a very different tune. 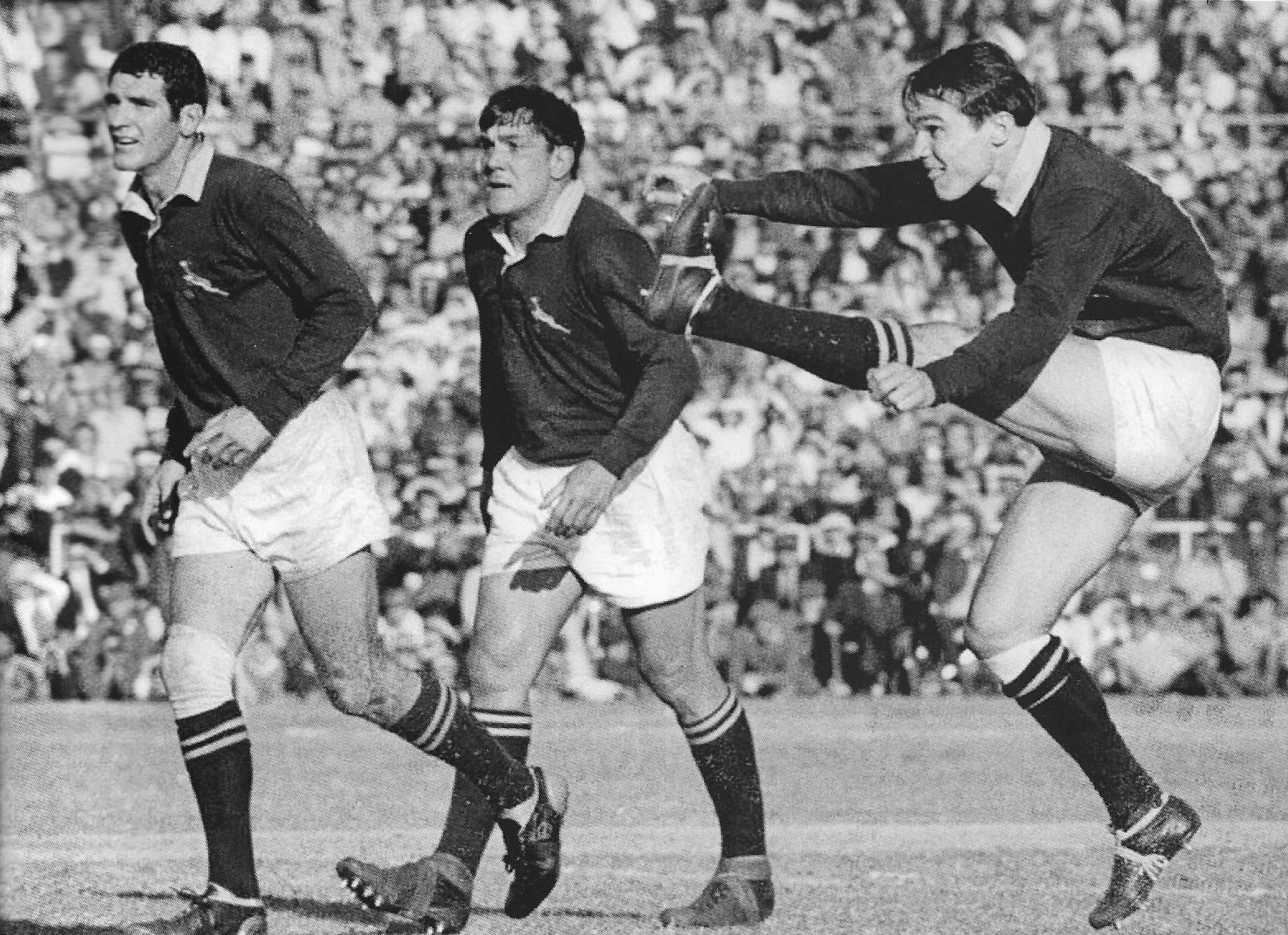 On the day of the match the atmosphere at Loftus was the most intense I had ever, or since, experienced; it was as if the atmosphere could be cut with a knife. South Africa had prepared for five years for this day and at last the moment of truth has arrived. On paper the All Blacks clearly looked the stronger team, but losing to them was simply not an option for the Springboks who carried the honour, hope, hunger, desire and will of all of SA rugby with them into the game. With the benefit of hindsight, I guess there was no way that NZ could win that game, but we did not know it at the time.

Piet Visagie kicked off for South Africa and the Springbok pack arrived on the All Black 25 at the same time as the ball. The impact was an earth shattering, bone crushing affair that set the pattern for the match and the series. The monster pack of the All Blacks wobbled visibly, recovered somewhat and then was hit again. The determination and inspiration of the Springboks was simply awesome.

A poorly directed kick up field by Fergie McCormick was gathered by Jan Ellis and he charged forward through the All Black defence, followed closely by Visagie. Just short of the line Ellis passed but did not find Visagie. During these opening minutes the mighty All Black pack was handed a drubbing such as New Zealand had rarely been subjected to in their entire history.

Scrumhalf Chris Laidlaw, unnerved at the sight of his usually all-conquering forwards suddenly going backwards, was beginning to crack under the pressure. From a scrum just outside the All Black 25, the ball came out sluggishly to Laidlaw due to pressure from the Springboks. As Laidlaw put his hands out to pick up the ball, Piet Greyling who was waiting like a hawk, saw his chance and kicked the ball on towards the All black line.  As the ball spun forward, Malcolm Dick tried to recover but the ball was again kicked forward by Greyling. Wayne Cottrell came racing across to cover but Dawie de Villiers got there first and dived on the ball for a try to the utter delight of the 55 000 crowd. McCullum could not convert. 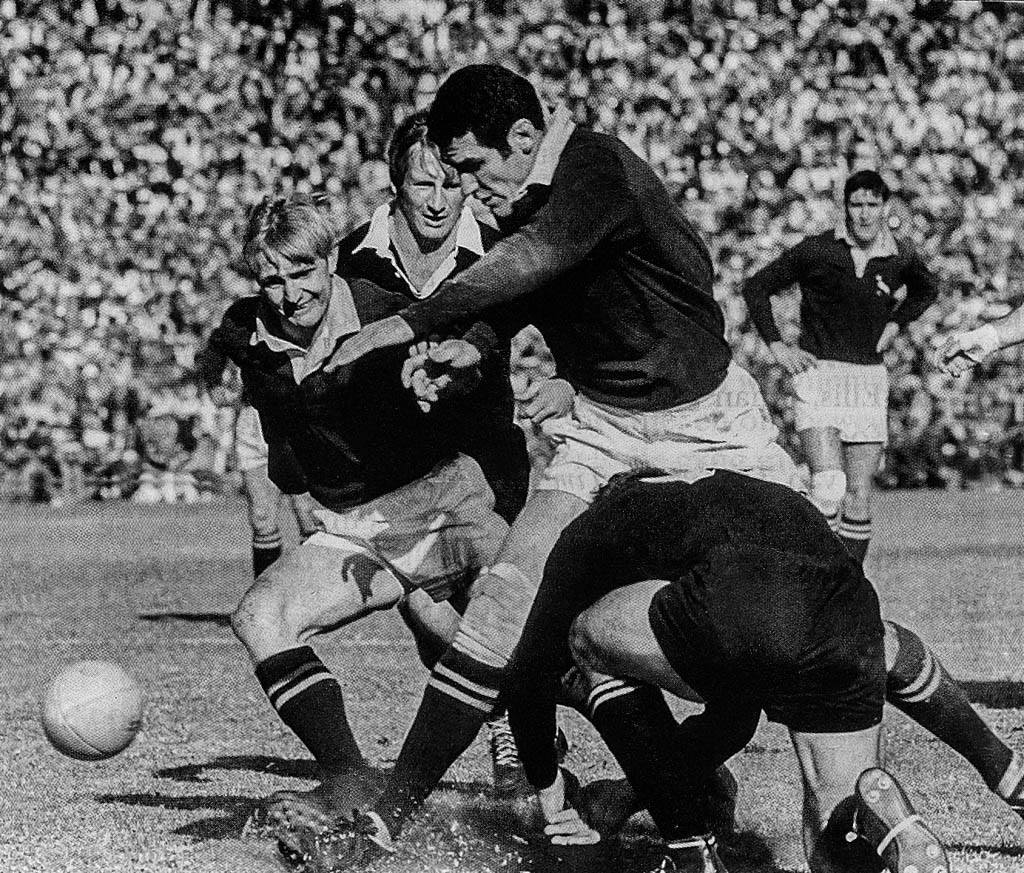 The Springboks continued to camp in All Black territory and to apply pressure. Frik du Preez, playing like a Trojan, won the ball in a lineout and gave to scrumhalf De Villiers who was well protected by his forwards. Now it went to Visagie who took three steadying steps before snapping over a 35 yard drop goal. Springboks 6 – All Blacks 0.

Often on tour thus far, provincial sides would take the All Blacks by throat early on, only to see the latter flung the provincial team aside like a lion would do to a jackal. Everybody was waiting for the inevitable All Black retaliation, but the All Blacks were not just indulging some Springbok cheekiness, they were fighting for their lives!

What came next was one of the most famous tackles in Springbok history – a single tackle which had a marked impact on the entire series. Wayne Cottrell received the ball from a loose maul and moved to the blind side. In a split second novice Springbok centre Joggie Jansen wrote his name in gold in the Springbok annals. He sped towards Cottrell from 15 yards away and when within three yards of the All Black launched himself into a bone-crushing tackle. He hit the hapless Cottrell in the solar plexus who jack-knifed in mid air before crashing to earth some yards behind the line from where he had initially received the ball. Cottrell did not move for minutes but eventually got up and played on. This was the tackle of the series and resulted in much uncertainty amongst the All Blacks. Their running fifteen man rugby would from now on be played under a cloud of doubt. No longer would Cottrell be the elusive runner with his confident sidesteps and sure hands that South Africans came to admire so much. One of the Afrikaans Sunday papers had a front page headline the next day which read: “South Africa again has a Ryk van Schoor”. The mantle of South Africa’s great tacklers of yesteryear, Jimmy White and Ryk van Schoor, had fallen on the shoulders of Jansen. 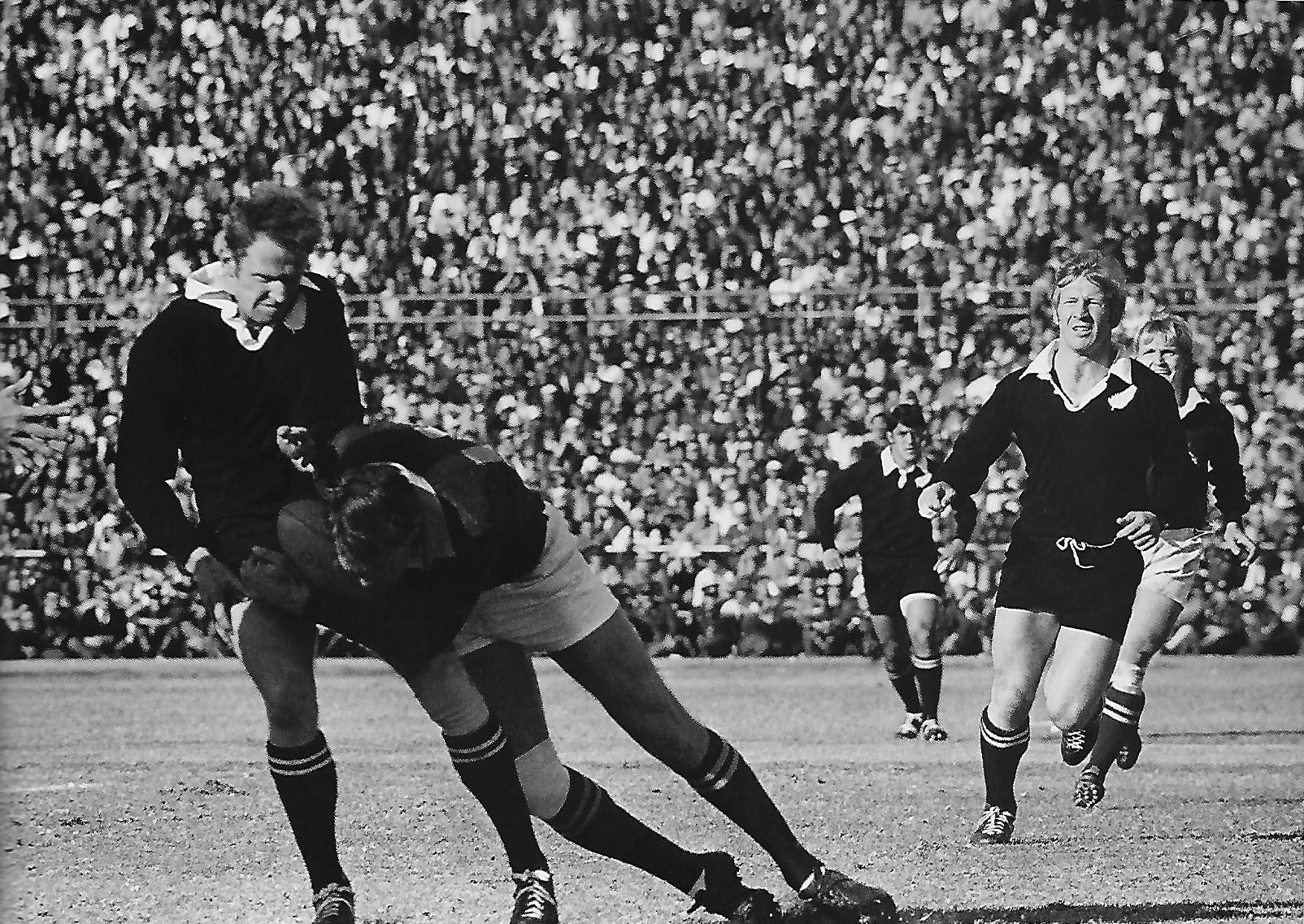 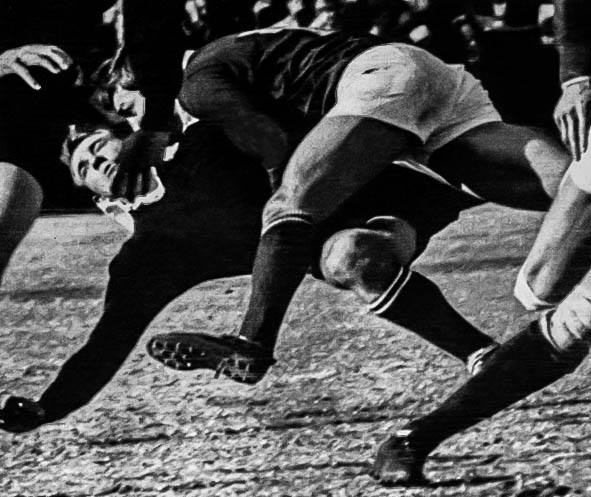 Minutes later McCullum landed a penalty to make it 9 – 0. Then the All Blacks started to fight back. They tackled like demons and threw themselves at the rucks and mauls with reckless abandon. Once Tom Lister managed to get past Piet Greyling, handed off Albie Bates and fed Laidlaw who just missed with a drop kick. Then Lister tried to put Bryan Willaims away with an open line but Visagie intercepted and kicked into touch. Tried as hard as they did, the All blacks could not break the Springbok stranglehold.

Dawie de Villiers put Gert Muller away from a maul and the latter tried to run over McCormick who was up to the task and brought the flying Springbok down with a fearless head-on tackle. Then Mannetjies Roux took a half gap made by De Villiers but was tackled just as he broke clear. Next it was Joggie Jansen who shook off a tackle, handed off another All Black, sidestepped through the gap and hared off into All Black territory. When cornered near the All Black 25 he passed to Tiny Neethling who charged for the line, but was called back for a forward pass. Laidlaw went offside right in front of his posts and McCullum had no problem taking the three points. Halftime: 12 – 0. 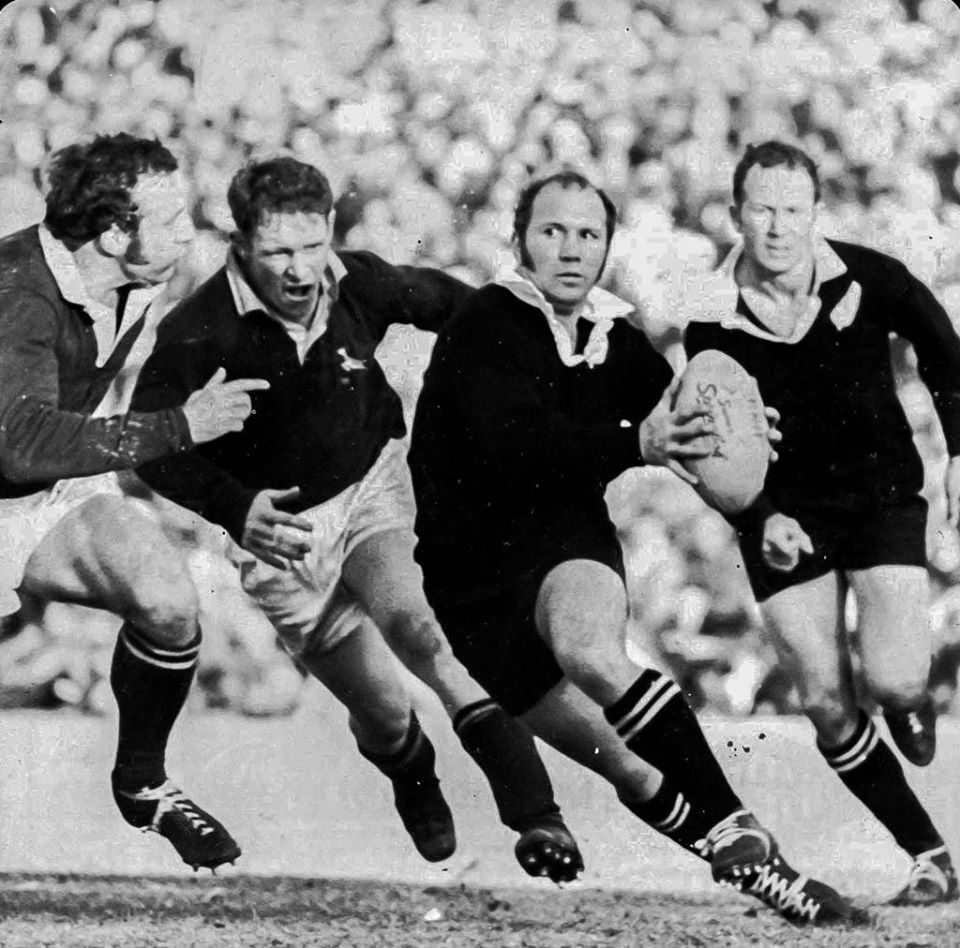 The All Blacks resumed with tremendous vigour but McCormick missed his second penalty. Laidlaw had taken a fearful double tackle from Frik du Preez and Albie Bates and was badly shaken but resumed after treatment on the field. He did not last long and was replaced by the nuggetty Sid Going.

Jansen ran through a gap between Graeme Thorne and Ian Macrae and lobbed a long one-handed pass to Gert Muller who knocked the ball forward in his eagerness. Then Mannetjies Roux cut through, stumbled slightly, and raced onwards, changing the line of attack to the blindside where Piet Greyling also knocked on. More Springbok attacks and breaks, one notably by Frik du Preez, broke down , and McCullum just failed with a sixty yard penalty. The Springboks certainly left quite a few points on the field. 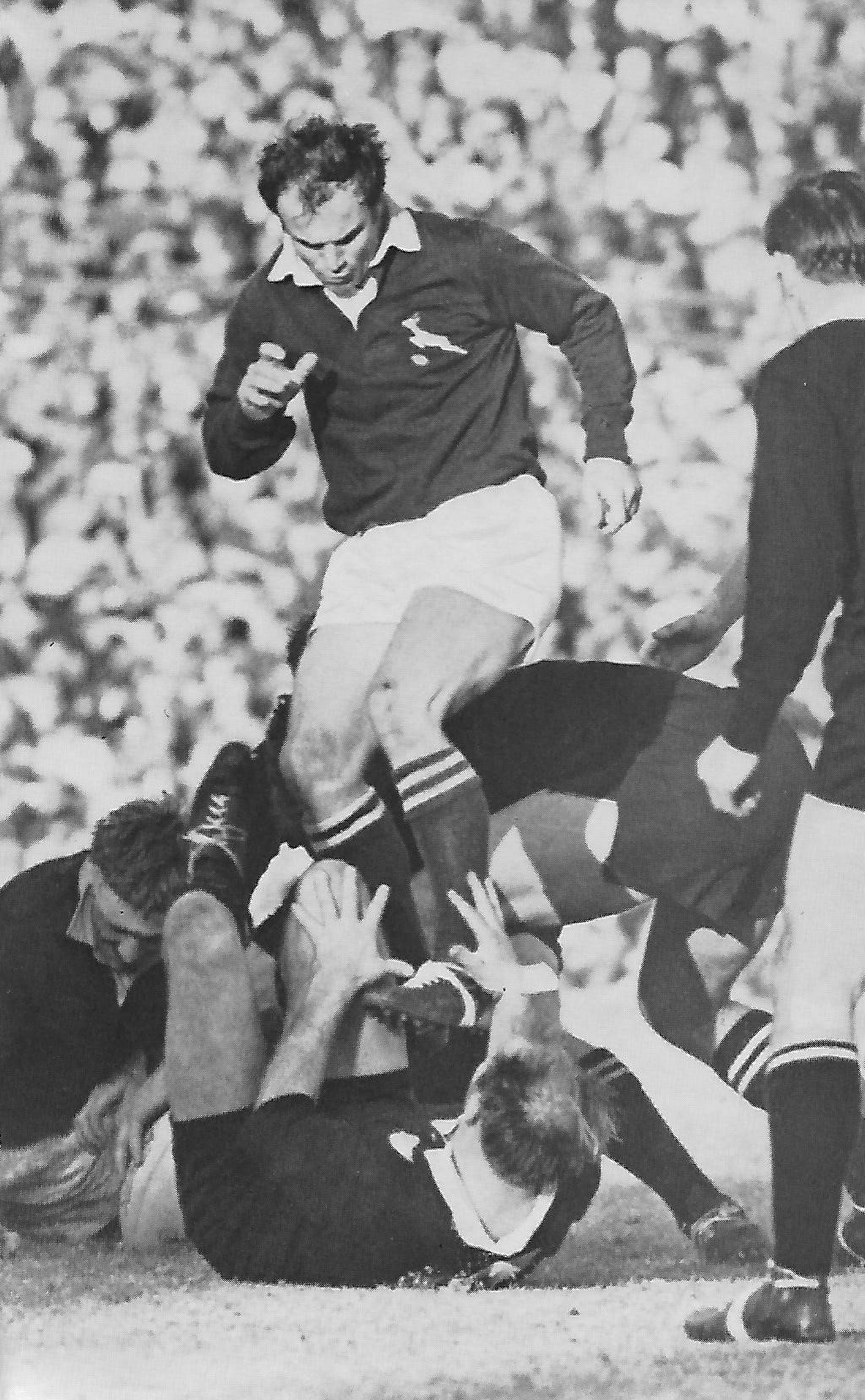 Then De Villiers went offside and McCormick kicked the penalty to make it 12 – 3. With less than 30 minutes to go, Gert Muller once again got the ball after Visagie kicked perfectly into the box. Once again Muller did not see the support on the inside and was smashed into the ground by McCormick. Next Sid Going went round the blindside and fed Bryan Williams. With deceptive acceleration he was suddenly clear with only McCullum to beat. He found this easy. He first stepped to the left to put the Springbok off-balance, and then slid past him like a ghost. He still had forty yard to go and Syd Nomis just could not catch up with him. McCormick could not convert and the score was 12 – 6.

The All Blacks seemed to take courage from Williams’ try and applied fresh, sustained pressure. Ian MacRae was once almost over, and after five minutes of desperate defence Visagie attempted a sixty yard penalty. It missed but brought respite for the Springbok forwards. With ten minutes to go Jan Ellis got the ball and dashed down the field in characteristic one-handed fashion only to kick the ball over the deadball line with the whole Springbok backline waiting to capitalise on a double overlap. Brian Lochore went offside and McCullum missed a sitter. Then Malcolm Dick almost got through but was tackled right on the corner flag. 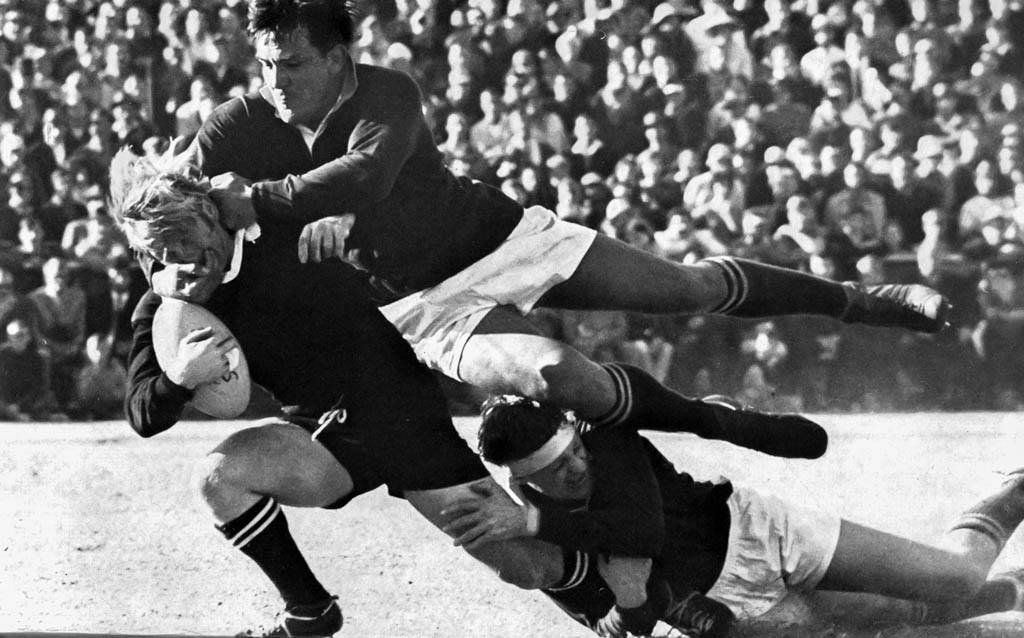 The All Blacks needed two scores to win and play swept up and down the field right up to the dying minutes. The final score came when Lochore emerged from a maul and lobbed a pass to MacRae some five yards away. Syd Nomis snatched the ball out the air and set off for the line like a hungry cheetah. He threw himself joyfully over the try-line and McCullum converted. In the last movement of the day Visagie attempted another drop, but just shaved the upright. Final score: 17 – 6.

It was an unforgettable match; a brilliant invincible All Black side put to the sword by a Springbok team who played with such passion and commitment that nothing could stop them. It is illustrated by Dawie de Villiers’ halftime team talk. He simply grabbed hold of his Springbok jersey, pulled it away from his body and with his eyes flaming in fanatical commitment, said: “Springbok”, pointing at the emblem on his chest. And that was his team talk. Nothing more was needed.