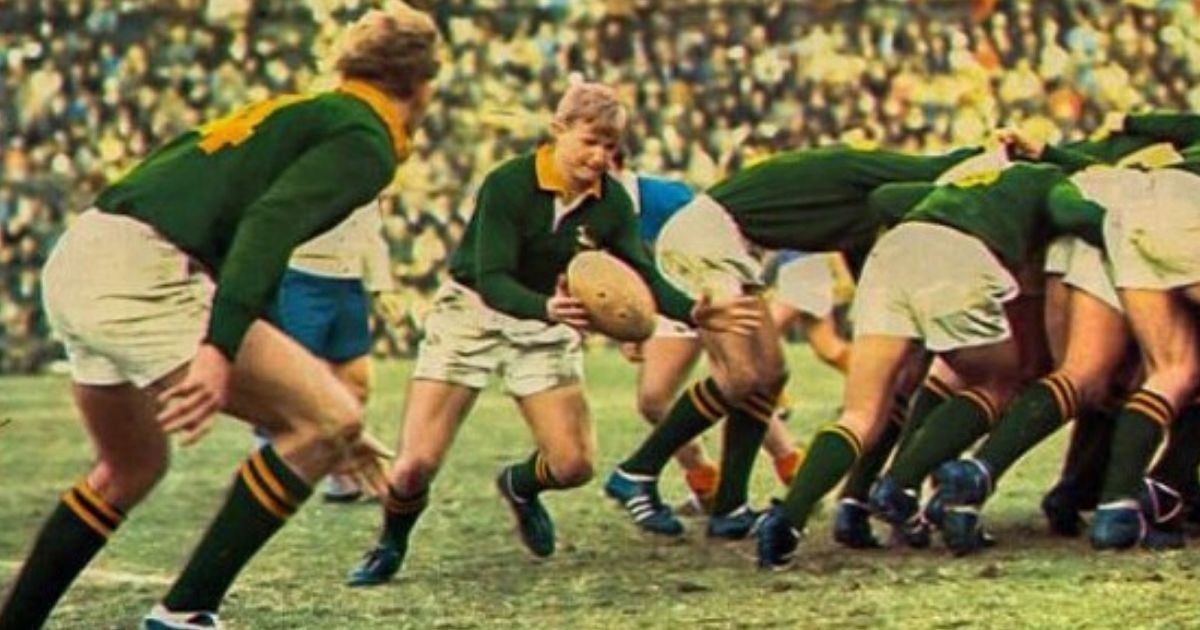 The years 1964 and 1965 were the dark years of Springbok rugby. The trouble started in 1963 with the drawn series against Australia. Then in 1964 the Boks beat Wales in Durban but lost 6 – 8 to France in Springs in probably the worst performance by a Springbok team to that date. In 1965 they manage one victory in eight test matches. On the return of the Boks from New Zealand, chairman of the selection committee, Flappie Lochner, spearheaded a five year plan to restore Springbok rugby to its former glory. This eventually culminated in a series win over the 1970 All Blacks to become recognised once again as the rugby champs of the world.

When the 1967 French team arrived in SA, the quality of Springbok rugby was questionable and public confidence was at a low. In addition, the Boks seemed to have developed a complex when playing against France. Hennie Muller’s team beat the French 25 – 3 in 1952, but that was the last victory. In four test matches over 15 years since 1952, the Springboks could not win a single one. The unorthodox French style of rugby seemed to be just too much for the South Africans. The 1967 French were also the European champions at the time and were the hot favourites for the first test. 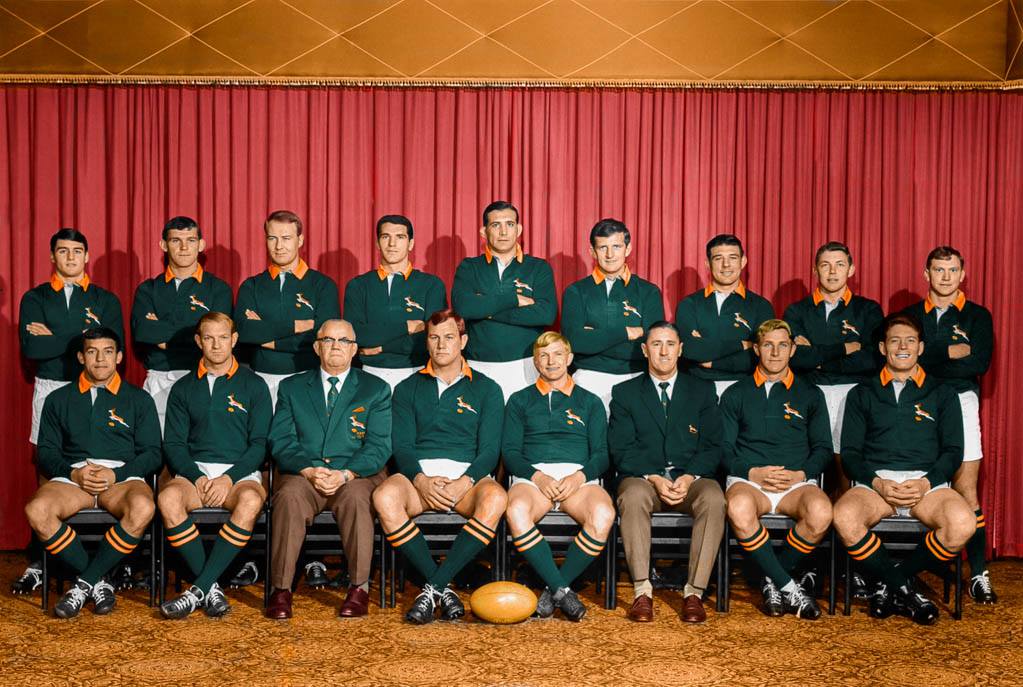 For the first test in Durban South Africa blooded eight new test players in H. O. De Villiers, Eben Olivier, Piet Visagie, Gert Kotze, Gys Pitzer, Tiny Neethling, Piet Greyling and Albie de Waal. Coach was Ian Kirkpatrick and the manager Boy Louw.  This was the first test match of the five year plan and was a match that had to be won. Danie Craven described the game as probably the most important game yet played in SA.

The French were simply blown away in a superb Springbok performance. The Springboks went on the attack from the kick-off. H O de Villiers missed a penalty and a drop in the opening minutes of play. The first try came within four minutes. The French knocked-on just inside their 25. Gys Pitzer heeled and Corra Dirksen came from the blind-side wing to take Dawie de Vlilliers’s pass – Piet Visagie having moved to the blind-side as a decoy. The left-winger ran straight over fly-half Camberabero without losing a stride and made straight for the try-line. Lacaze and Douthe might just as well have tried to stop a runaway Oshkosh truck. Dirksen crashed over the line next to the left upright for a try scored with so much power that it must have rattled the French to some extent. H O de Villiers converted. 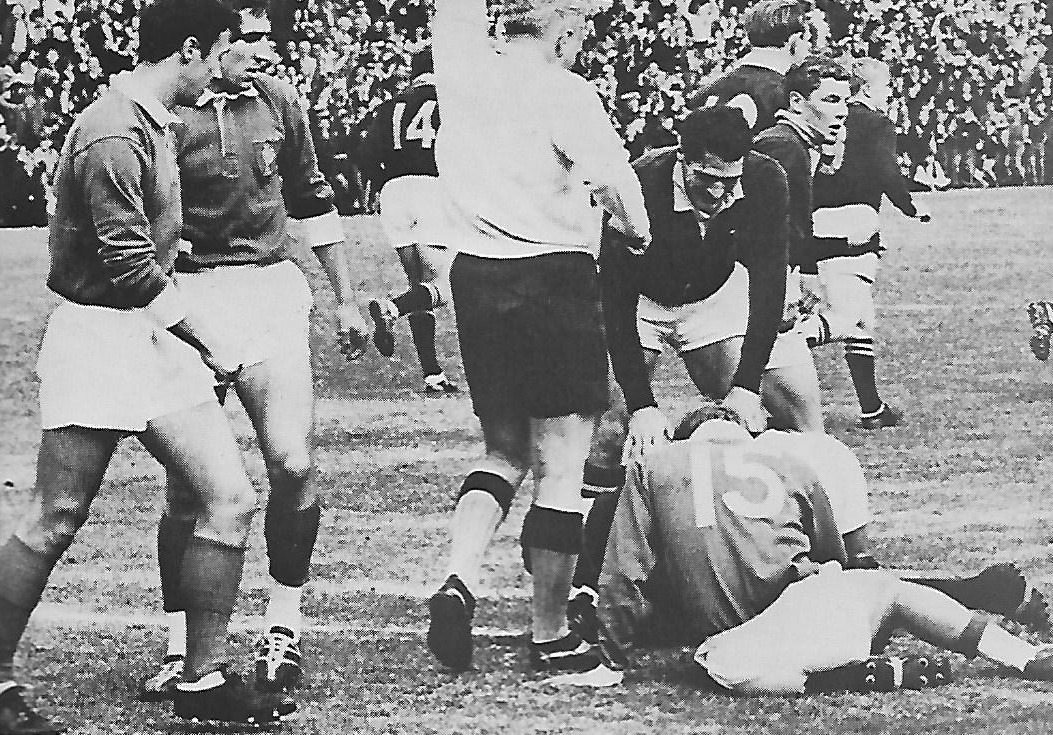 This try came from a move planned by coach Ian Kirkpatrick, who had participated in a similar move, though not identical, in the first test against the 1960 All Blacks when Mike Antelme also came from the blind-side wing into the fly-half position.

Camberabero missed with a drop and a penalty and then the French scored. From a scrum just outside the Springbok 25, Cabanier heeled against the head which caused Piet Visagie to be slow in coming up on the defence. The Springboks seemed to expect the fly-half to drop, but spotting Eben Olivier coming for him Camberabero passed cleverly to Douthe who ran through a gap between the Springbok centres. He kept running to the left and outsprinted Albie de Waal. H O hung back and Jannie Engelbracht came infield too late for the tackle. Douthe’s try made the Springbok defence look shaky. Camberabero could not convert, but two minutes later H O landed a penalty.

Although down 3 – 8 the French were still very much in the game. But then the knock-out blow came through a try created by H O de Villiers. He caught the ball at full speed from a failed touch kick near the left touch line. He dummied inside, bumped off Quilis and Puget, and after a 20 yard dash to put his forwards onside, kicked ahead perfectly. The kick landed just short of the try-line and caught Lacaze out of position. Jan Ellis was beaten by the bounce but Piet Greyling was just behind him to collect the ball and dive over spectacularly for his maiden test try. H O converted and it was 13 – 3. Then Dirksen again came into the line, this time outside Visagie, and though he was tackled Jan Ellis was up in support and he beat a few defenders before scoring close to the posts. H O converted to make it 18 – 3 at half-time.

This was the first test that Ellis and Greyling played together and they were awesome. There was a lineout inside the French 10 yard line and ball came out untidy. Jan Ellis was quick to pick it up set off on one his typical weaving runs. When he was checked a few yards from the line, Piet Greyling was with him, took the pass and scored his second try. Once again H O converted.

There was a lot of rough stuff amongst the forwards and referee Strasheim had to stop the game a few times for punch-ups. Suddenly Spanghero was dropped as if poleaxed, courtesy of a magnificent straight right by Gys Pitzer. Tempers then seemed to cool, but France was kept under pressure.

The final points came from a spectacular try by the irrepressible Corra Dirksen who was described as “….. a veritable monster” by the French journalist Jacques Carducci. The ball came down the Springbok backline from a line-out to reach Dirksen on the halfway line. He came infield, swerving inside three or four times before straightening and eventually scoring near Jannie Engelbrecht’s right-hand corner. This time H O could not convert, but then both Visagie and Engelbrecht scored only for the tries to be disallowed. Final score: 26 – 3. 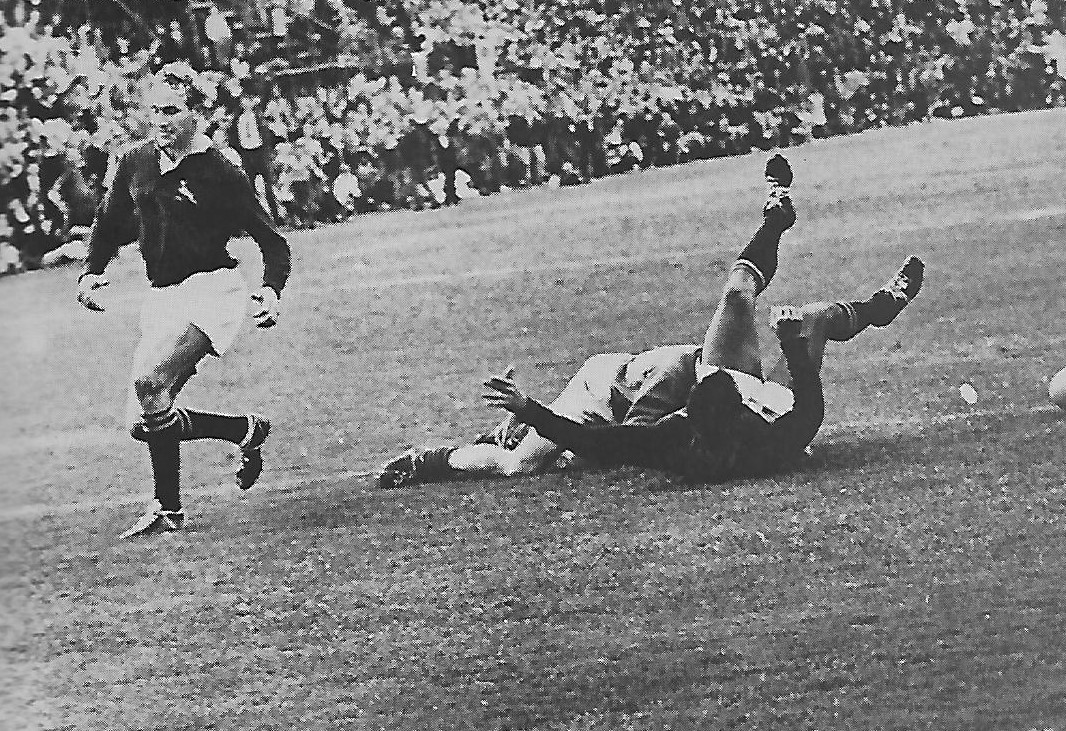 The champions of Europe had been comprehensively beaten and the Springboks made an unequivocal statement: they were back in international rugby and meant business.